CALL FOR A FREE CONSULTATION

Patric Parker was admitted to the bar of the United States Supreme Court on March 3, 2014. As a result, he may now argue cases before our nation’s highest court. 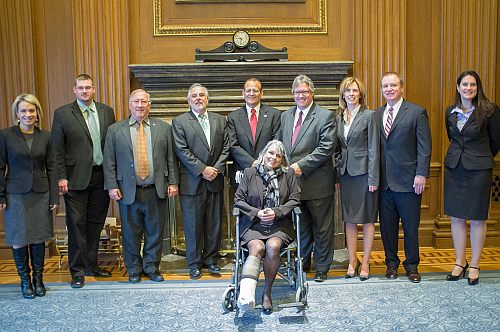 In order to qualify for this honor, Mr. Parker received a certificate from the Michigan State Supreme Court evidencing both his admission to practice in the State of Michigan, and his current good standing. His admission was formally moved at the Supreme Court building in Washington, D.C. by Genesee County Bar Association President Erwin F. Meiers III, who is already a member of the US Supreme Court Bar.

After the swearing in ceremony, Patric Parker observed the main business of the Court that day, including oral arguments on Halliburton Co. V. Erica P. John Fund.  At issue was an essential element of class action certification in securities law matters.  Arguing for respondent was David Boies, one of the preeminent litigators in the country.

What People Say About Us

"I have used this law firm many times over the last few years. Each and every time it has been my pleasure to deal with people that have my best interest at heart ... I will continue to use these services, and would recommend this firm to anyone."
Brandilyn Moran-Coffey
“I needed legal representation on a personal matter. SF&P was quick, efficient and discreet, the kind of old-school service you don’t get anymore. I cannot recommend them highly enough.”
M. L.
“Thanks again for all you have done for us. I know that the work you have done on our behalf far exceeds what you are getting paid. If we could pay you more, we most certainly would. We thank you so much.”
C. M.

For a free, no obligation consultation call 810-235-9000 now to set up an appointment with an attorney.